We have interviewed that the leading Shakuhachi artist from Moscow, who has expanded the field of activities to Japan since 2013. 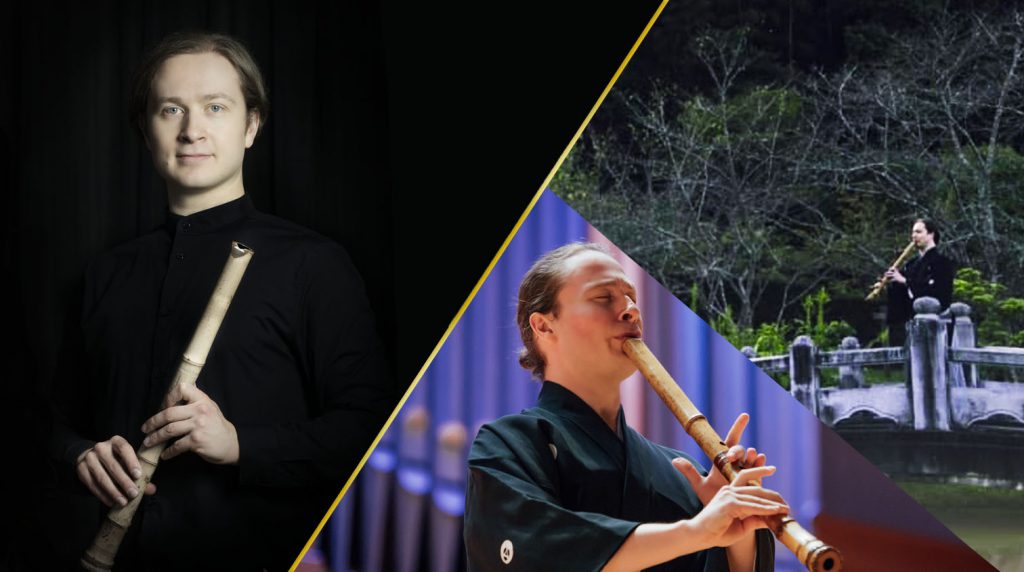 Having first encountered the shakuhachi in his teens, and moved by its wonderful qualities Pavel became inspired to begin practicing himself. He went on to study at the World Music Center department of Moscow Tchaikovsky Conservatory governed by Karatygina Margarita, and started to study under Kouhei Shimizu, Iwashin Alexandr and to perform at the “Folk Music Festival”, “Nihon no Kokoro”, then later was to make many appearances on Moscow radio and television, etc. as Moscow’s foremost shakuhachi player.

After arriving in Japan In 2013, he began studying under Toshimitsu Ishikawa and at the same time began his Japanese performances. His diverse range of performances includes those at the Agency for Cultural Affairs; Cultural Ambassador Forum (in Roppongi, Tokyo), the Hirakawachō Spring Performance, the Echizen Kizuna Evening Concert, Toppan Hall, and the Okayama Symphony Hall, as well as museums and temples throughout Japan. With the Moscow Conservatory Takemitsu Toru’s “November Steps” was performed in Great Hall.

He was also accepted for an audition for NHK’s Hōgaku (traditional Japanese music) and won two biggest Classical Japanese Music competition in Kumamoto in 2016 and 2019.

In 2019 he was graduated from the Tokyo University of Arts, where he got his masters degree at shakuhachi performing faculty.

Pavel is the only foregn member of Japanese Professional Shakuhachi Network and the head of “Honkyoku-kai” the organization concentrated on keeping the classical shakuhachi repertoire.

Bringing the musical qualities of the shakuhachi closer to a greater number of people Pavel sees as a great joy, and is thus greatly motivated to also be performing at schools and workshops throughout Japan. The belief is that music is a communal experience that one can partake of regardless of nationality, race, or age.

And further, in the understanding that the roots of music are one, Pavel aspires to perform not only ancient music, but works replete with variation such as classical, contemporary, and recited music, to name but at few.

When I was a child I didn’t have a PC or internet, so I always found myself reading. Moreover, being an academic singer, my mother started to educate me and at the age of 5 I had my first stage experience. Several years later (my mother was working at school as well) I was helping my mother to compose music on a Yamaha PSR-510 synthesizer, taking part in children’s musicals, and working as sound producer and engineer from elementary school till high school. Summer holidays in Russian schools are quite long, so I often traveled to my great-grandmother’s village in the woods 200 kilometers (124 miles) from Moscow. To this day I love nature and the forest because I spent all my childhood surrounded by it.

Just after my birth the USSR turned into the Russian Federation, so our economic situation left much to be desired at those times. But after several years I got a Sanyo portable cassette player as a birthday present. I was so happy listening to different genres of music. Sometimes I recorded radio and created mixtapes. In the beginning I liked the American pop scene, later rock, electronic music, and D’n’B – these genres I found with the help of friends. Sure, I was listening to Tchaikovsky, Mozart, and other composers. I liked different elements in each genre of music.

So, reading books, living close to nature, listening to the best music in the world – this is how I could describe my childhood.

In different genres of music it’s possible to find what you want at the present moment. For example, when I was contemplating space and the universe I turned to electronic music, when I wanted something heartwarming I chose pop music, for dynamics – rock, and so on. But when I discovered the shakuhachi, I realized that there is everything in its classical repertoire. It’s complete. That’s why I’m concentrating on it and doing my best to deepen my understanding and knowledge. In the beginning I was learning only by listening to recordings, but I understood that only in Japan it’s possible to reach the core of the art. Japanese classical music is connected with literature, philosophy, history, and other disciplines. So, during the process of education it’s important to get an understanding of a wide range of these elements. To this end I studied with different performers, getting advice from different perspectives.

How did you discover the shakuhachi? Do you have any stories to share?

The shakuhachi is made of bamboo mostly. Its natural shape stays unchanged, so each flute has a unique feeling, pattern of wood grain, and character. Even flutes from the same maker sound and feel completely different. So, it so difficult to find the flute which suits you. And I was extremely lucky to find one of the rarest instruments in the world. Moreover, with the help of other musicians and people I could do my best to make progress. And it was possible only because of the people around me. Compared to other parts of my life everything connected with the shakuhachi and music was going smoothly in my opinion.

You value classical music and explore the possibilities of the Shakuhachi at the same time, collaborating with Western music instruments and pipe organs. Do you perform musical pieces which were originally composed for the Shakuhachi?

It isn’t as if there are hundreds of pieces originally written for the shakuhachi and classical orchestra. But recently many composers have started to contribute new works, and it depends on the specific concert program, but still the percentage of original duets and trios (with the shakuhachi and European classical instruments) isn’t so big. As a result, I try to find pieces in European repertoire which are suitable for the shakuhachi as an instrument and which expand my possibilities as a performer, so I prepare a special shakuhachi score, marking alternative fingerings while keeping the core and the soul of the piece. 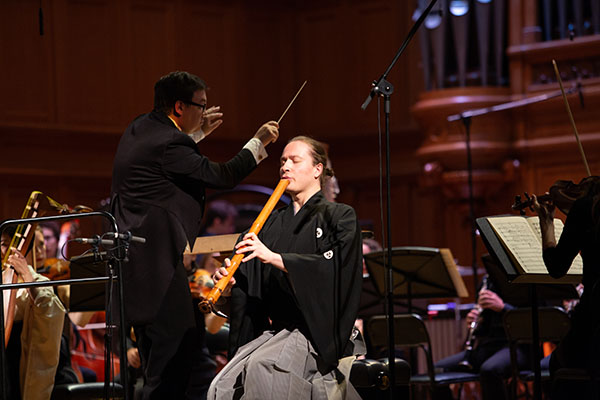 What is most important thing to you in your performance.

I think everything is important; it’s difficult to prioritize something. Musical technique, synchronized breathing with your partner, unfolding the inner meaning of the piece, making the audience happy, creating a sense of atmosphere with only a single flute and melody, etc. There are many things to be observed properly. In summary understanding a piece is the biggest mission.

Also, after having practiced the piece hundreds of times, it’s important to imbue it with life rather than just reproducing the same performance every time.

Please tell us your next goal. Do you have any music you would like to attempt in the future?

Alongside European music performed by Japanese players in the world, I’d like to present shakuhachi music and share it with the world, and I’d especially like to create all the necessary conditions to let Japanese classical music bloom in Russia. And gather people and students who love the shakuhachi and do everything to create a strong performing tradition in Russia and overseas. To build the foundation I’m in the process of writing a shakuhachi textbook in Russian, which I hope will be translated in English and Japanese in the future, because there isn’t any such textbook at present.

Then I hope it would be possible to create “Kokusai Shakuhachi Kensyukan” in Russia. “Kokusai Shakuhachi Kenshukan” is a shakuhachi organization created in the 80’s by Yokoyama Katsuya, one of the most significant performers. Now it has departments in the USA, Europe, and Australia, holding international shakuhachi festivals all over the world. My teacher Ishikawa Toshimitsu is a “Kokusai shakuhachi” member, and a wonderful performer and teacher. So having a Russian department would have a great influence on the situation with the shakuhachi, I think. It’s a great goal to promote a highly artistic image of the shakuhachi and to continue the legacy of Japanese classical music.

Also Mr. Fujikake created so many wonderful pieces and I’d be happy to perform those which were performed by one of my favorite flutists – James Galway, alongside ensemble pieces.

And last but not least, I’d like to perform Takemitsu Toru’s “November Steps” again, which is one of the best pieces to share European and Japanese musical traditions, and which conveys a feeling of unity  through the beauty of the music.